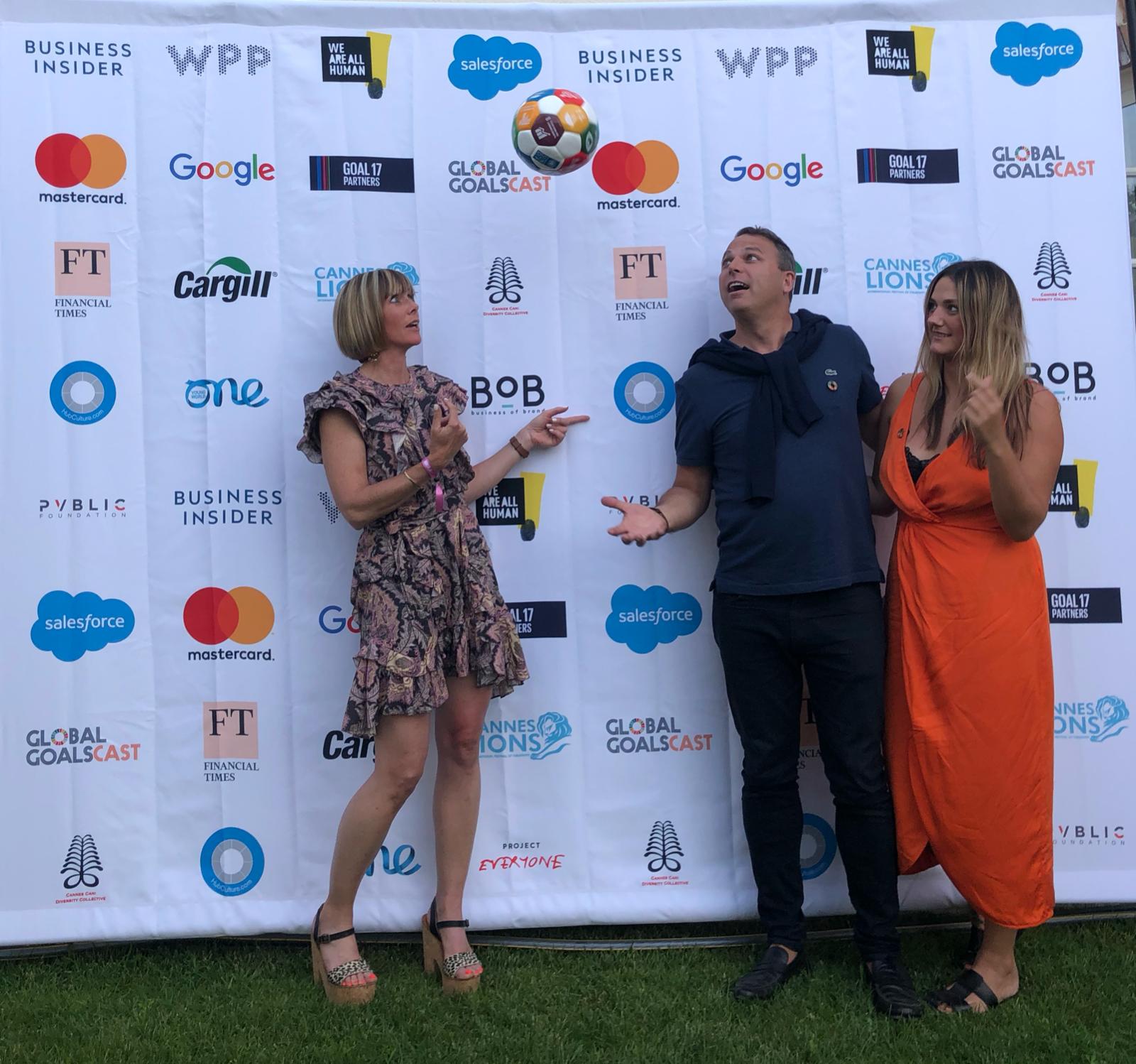 I was in Cannes for the Cannes Lions Festival of Creativity last week.  I worked with Hub Culture, recorded the last episode of Season Two of Global GoalsCast & generally listened and learned from a variety of smart folks in media, publishing, advertising and communications. Here are three things I learned.

1.  Both Brands and Buildings  can help fill a void in society.  Brands that take risks acting purposefully will win.

I listened to Richard Edelman in conversation with Thomas Heatherwick – the designer behind the new Routemaster Bus, the new Google Building and the Olympic Velodrome in London to name a few.

Richard – married to Claudia my co host and CEO of Edelman – talked about the lack of trust we currently have – in governments, in media, etc.

He pointed out that 2/3 of people are currently worried about losing their jobs to a robot. While we have seen the losses in manufacturing already there’s more job losses coming in retail, etc.  And that this will affect women more. I know from creating the Global GoalsCast podcast on Youth that what is different about political youth movements of today is that they are led by women – so women – like men aren’t going to stand by and lose their jobs without a fight.  He pointed out that its interesting to see that a lot of the Gillets Jaunes are women.

That trust deficit can be filled partially by business. Most people now have more trust in ‘my employer’ than anyone else. What an opportunity.

So to be heard brands have to take risks.

And – we need to break bubbles by meeting and talking. Which is where Thomas Heatherwick comes in.

Given how long it takes for a project to be built – 6 years for a building – 11 years for an airport – why is it that so much of the built environment is so rubbish?  Thomas was surprised to find that the world of advertising hadn’t grabbed on to the built environment more to create lasting physical brands. While it is terrifying to make something permanent, there’s a big physical opportunity.

He talked about the opportunity you create – when you build something people love – they go there – to experience the mood and feeling of the place- and while they are there they interact with others.

These connections they create with other people are very important. In a time when the pace of retail store closures is accelerating due to online commerce, what we gain in convenience we lose in the physical interaction between people who are different to us.

When the government is cutting spending on music, education, veterans, these are all opportunities for brands to create something lasting and beautiful. 40% of Japanese don’t exercise anymore. This is an opportunity for a sports brand.

2. The Sustainable Development Goals are getting traction.

Along the Croisette – the main drag in Cannes – I saw a lot of discussion about plastic, oceans, equality, diversity and inclusion.

Whether people know it or not – all of those ideas are covered by the Global Goals.

I hosted an Ordinary Club of Extraordinary Women lunch with Hub Culture & Seema Kumar of Johnson & Johnson.  I no longer have to explain why men are invited to lunch (we need Men as champions) and loved the dual nature of the guests’ identities. Jacques Lavoisier, one of my favorite DJs,  has launched DJs4Good – a movement for DJs to give part of their earnings to the charity of their choice. Jacques is supporting the Mark Pollock Trust – to help Mark Pollack – and other paralyzed people DANCE again.

Seema Kumar is launching – outside of her J&J work – an initiative called Seema – to highlight the great women of the Indian subcontinent living abroad.  Part of Seema will also support women and girls’ education in India.

Purpose alongside Profit is gaining traction.

3. Big names are getting behind the idea of cutting consumption.

While I was in Cannes the Pope announced he had convinced major oil companies to sign this agreement.

This was handy timing as Martin Rees – Head of the Center for Existential risks and Astronomer Royal – a guest on the next Global GoalsCast told me getting big names like the Pope to stand for the climate and against consumption were critical.

Cutting consumption is the subject of the podcast I recorded at Cannes in a closet at 06:30 with Claudia.

The motivation behind this episode is Sustainable Development goal 12, responsible production and consumption. It may not SOUND very dramatic – like ending poverty or educating everyone… but it IS. Like every other goal It is connected to so many other goals –  climate action – sustainable cities – life in the sea.

One of our guests is Pulitzer Prize winner Jared Diamond (and Professor at my alma mater UCLA ).  As Diamond says,

‘The world’s human population is a subject that was at the forefront, thirty-forty years ago…when many people said: “it’s the biggest problem for the world.” Since then we’ve learned no, it is not the biggest problem for the world. What counts is not the raw number of people; what counts is the total consumption rate, because there’s enormous variation between people’s consumption rates in different parts of the world.
Consumption rates meaning, consumption rates of water, fuel, and other resources (metals in the developed world) on the average are about 32 times those in the poorest countries…and that means that one American citizen has the impact of the world as 32 Kenyans. I mentioned specifically Kenyans, because there are many Americans who feel indignant and concerned about the growing population of Africa. And yes, it’s a tragedy for Africa, but as far as the impact on the world is concerned, 50 million Kenyans are equivalent to 1.7 million Americans; Kenya is trivial for it’s impact on the world. That’s why I say that what counts is consumption rates, rather than population itself.