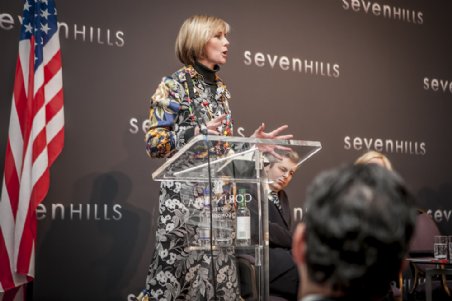 The good folks at Seven Hills asked me to speak on a panel kicking off President Obama’s second term. It was an incredibly stimulating evening.

Here’s a little write up of the event. They also produced a cracking video .

They debated a wide range of issues surrounding America’s future and the Obama legacy, with Edie’s comments on the nature of a second term reported by London daily newspaper the Evening Standard :

Second terms – like second mortgages, second marriages, and second trips to the salad bar – are seldom as gratifying as the first time around.

An audience of over 100 witnessed the debate, which was rounded off by former White House economic adviser Dr. Pippa Malmgren, who pointed out the eye-catching fact that the US government could raise income tax to 100% across the board and still take 15 years to fully pay down its debt.

On the debate premise – “For America, is the best yet to come?” – floor votes both preceding and following the panel debate showed more optimism than negativity on the prospects of a nation which, Fraser Nelson argued, “is conditioned to think that it deserves not just good, but great.”