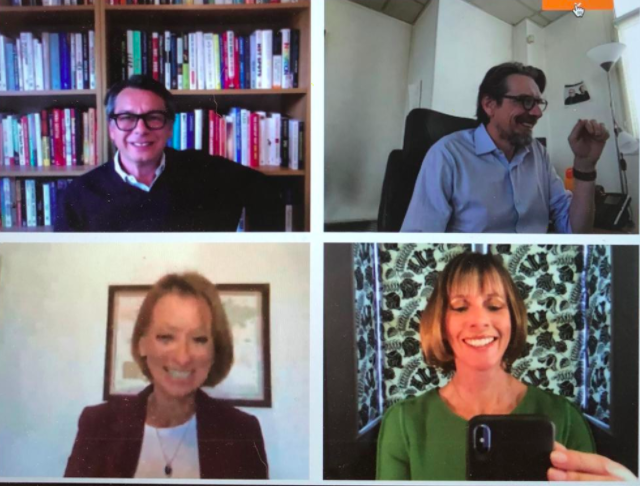 So with a fair chunk of the world of Covid19 lockdown for at least another month we have plenty of time to think about a post-virus future. What will happen? Will things go back to how they were? Will I be out of lockdown by my birthday (it’s in May, in case you were wondering.) Or will life be, as we have seen described in an avalanche of articles, changed forever?

I don’t believe anyone truly knows right now how deep the virus’s impact will be on society. There remains the chance that – with the right vaccine – we can crack it in a few months. Or – it mutates and it could be with us in one form or another for years or even decades.

Even if we are not planning the future with any degree of certainty, now is a good time to share what that future could look like.

I was delighted to be the MC and moderator of the recent online virtual event ‘We Won’t’ Stop Talking’ which was an initiative by Cosimo Turroturro of Speaker Associates, Tina Schneidermann, an event producer I’ve loved working with from pre-Covid-19 days and Alexandre Lafond of Media Active Group.

Recently over 1400 people from 86 countries tuned in to hear a range of speakers offering their insights. They were quizzed by me and the delegates who were popping questions into the chat room.

It was a logistical challenge to connect speakers who literally were in the four corners of the globe, but we pulled it off.

So what did they say and what lessons can we learn? Here are a few nuggets I picked up.

1 Dr. Alex Osterwalder – In business be prepared to experiment and fail

First up was Dr. Alex Osterwalder, who is a leading management thinker. In his presentation he spoke about how leaders can minimise risk and maximise impact by moving fast and following the right processes and metrics.

What struck me was his emphasis on testing and experimentation. He said that only one out of 250 business projects will be very successful and return 50x capital and that 60% will fail and not make any money at all. Alex stressed that knowing which projects to kill is a key entrepreneurial skill and that the current crisis gave business leaders time to re-evaluate their time and resources.

He finished by urging company leaders to spend a significant amount of time on business innovation, reminding us how many of the great entrepreneurs of recent decades spent much of their time thinking and dreaming.

“We are in the unknown unknown with Covid19,” argued Howard who is LEGO professor of management and innovation at IMD business school in Switzerland. He spoke about how we are solving problems from the ground up. But we are also entering a new era in the way we manage knowledge

Howard referred to the tools that are emerging to help us to become more resilient in this time of crisis. Among those he namechecked was

next generation collaboration tools like Alibaba’s DingTalk which he says is “like WhatsApp and Zoom together on steroids.”

Howard also led a brief discussion about how prepared companies were for this type of crisis. In our poll of the delegates nearly (or only, depending on your point of view) 50% of attendees believed that their company was ready for the communication challenges of Covid19.

Next up was Rahaf Harfoush, a strategist and digital anthropologist who took as her theme ‘We are not machines, so how we do we stop working like them.’

Rahaf began by reminding us that humans are not that good at predicting the future. She argued the future is not an abstract concept and said “we tend to focus so much on the tech that we miss the human angle.”

She spoke about notification culture, and how we are training ourselves to seek out constant stimulation. Rahaf argued that this creates addiction and we now have a culture where no one is ever bored and don’t have the chance to think.

“The shadow dream is the idea that if we work hard enough we will be successful. Yet we need to understand that in the Covid19 era we need time for creativity,” she said.

She finished her speech by challenging us to just sit on the couch for 30 minutes and think.

Thimon de Jong is a leadership trainer who took as his theme ‘trust in a post Covid19 world’. He said that after 15 years the trust pendulum is swinging in the direction of groups who had once had people’s trust but had had that trust eroded in recent years. He cited traditional media, scientists and key workers as groups we are trusting again. He added that he had been inspired by all those people working to help us through the crisis … Have a “nurse” mentality, asking yourself “Who am I here for?”

As for the future Thimon suggested that people were projecting their own prejudices onto what they see as the post Covid-19 future. So, for example, Climate Change activists see it as a golden opportunity to keep the lower carbon creation rate of the lockdown permanent. Meanwhile nationalists see it as another example of how countries when pushed into crisis focus on themselves and are suspicious of pan-continental organisations.

5 Rita Gunther McGrath – We need to think again about inequality

“The question on everyone’s mind is, what happens next?” stated Rita Gunther McGrath Rita who took inequality as her theme offering some key insights from her new book “Seeing Around Corners”

She stressed that Covid19 had to be seen as an inflection point after which there will be change. She asked “do we want a world where vast amounts of inequality are the norm?” In particular what struck me was when she said how wages have declined so much that the minimum wage of 1960 was $48/hour in today’s money.

Rita also said that one way to reduce inequality would be Universal Basic Income, but added that in most real world examples the money is not enough to live on, and we need to be careful not to disincentive people from being productive.

Broadcaster and author René Carayol spoke of how we have seen incredible examples of leadership in the crisis, and not just from politicians.

He argued there is a myth in western world that leaders are only at the top of the organisations. “Leaders are everywhere. Everyone can be a leader –  it is your choice.”

René also wondered what the impact of Covid19 might be longer term,

“Will people go back to their offices, or use their cars again?” He also pointed out how he thought that European politicians were now showing a degree of humility, and how this was part of being a strong leader.

7 Peter Fisk – Crisis is a catalyst for change

Peter Fisk is a business leader, inspirational speaker and author. He is a man perfectly placed to assess the way in which companies can use the current crisis as a way of moving forwards. He said “the best companies of tomorrow are being created right now. Now is the time for business leaders to step up, to have the courage to look ahead, with more purpose and passion, to create a better business for the future.”

To prove his point Peter said that as many as 57% of the top 500 companies were founded during an economic crisis.

“There is something that happens in a crisis which is a catalyst for change and is an accelerant for innovation,” he added

Now is the time for inspiring leadership!”

8 Mark Ritson – How brands can excel in times of crisis

Finally Mark Ritson, who is a brand consultant and former marketing professor, took as his theme the way in which brands need to work now to shape their future.

He spoke to us from the future (he’s in Tasmania, where it’s already tomorrow) and echoed his thoughts from a recent article for Marketing Week where he suggested that contrary to a lot of prevailing thought things might not change that much post Covid19 “Predictions of fundamental change after Covid19 are driven by the biased perspectives of those making them,” he said “in reality, most things will go back to how they were.”

So he exhorted brands to keep the faith that look forward to business as usual in the not too distant future. While many brands have reduced advertising and marketing budgets in the crisis he thought this was a wrong move. “History has shown us time and again that increasing your budget in marketing and advertising in a crisis or a downturn is the best way to come through it.”

If you need help with improving your online communication skills you are in the right place. Here are a few tips and testimonials from people I have worked with