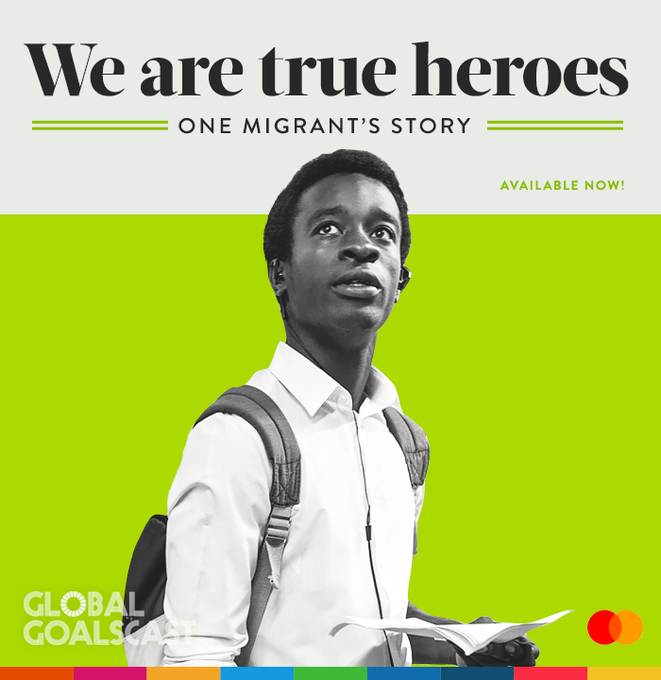 His name is Ibrahim Adnan Kondeh. He is one of thousands of young Africans who have crossed the Sahara Desert and the Mediterranean Sea in search of opportunity. Thousands more have died trying.

The latest episode of the podcast I present with Claudia Romo Edelman  is now live and tells a story that is both harrowing and uplifting.

You can listen to it here

Ibrahim retraces his journey from his village in Sierra Leone to the Libyan seashore. A trip that took him nine months. He started as a teenager running away from tribal initiation. But by the time he was done he had joined an extraordinary stream of humanity flowing north.

A report by the United Nations Development Program shows that Ibrahim is representative of a large group of young migrants from West Africa. They are by no means the poorest, or the least educated from their countries, explains Mohamed Yahya, lead author of the report. Indeed, they are prompted to risk the dangerous journey as their rising aspirations outstrip their sense of opportunity at home. Yahya urges both African and European officials to address this opportunity gap.

This episode also features Ann Cairns, from our sponsor Mastercard. She discusses Mastercard’s Digital Food initiative in partnership with the World Food Programme to provide money to refugees to buy food themselves, along with other basic necessities.

Ibrahim Adnan Kondeh, is a young man, 20 years of age, from Sierra Leone. He lived in a village with his family, helping with the farm and local shops. As a result of his family’s huge sacrifice, he used to go to school there, so he wasn’t among the poorest. Sadly, he was forced to escape when approached by a secret society that “grooms boys to become men”, facing tortures and threats. He then went on a journey eventually making his way into Italy. He arrived in Italy as an unaccompanied minor 3 years ago at the age of 17. The way there was not easy. He was kept as a slave in various locations on this journey. His boat was rescued crossing the Mediterranean Sea. His arrival at a reception center for refugees in Calabria was not very welcoming, the center was very crowded and would not offer services, such as education, for minors. After overcoming these roadblocks, and even learning Italian, Ibrahim was recognized as a bright writer, winning renowned competitions, such as the Moleskine Foundation and the U-Report Contests. Once his voice was heard, he became a U-Ambassador and active member on the platform and U-Blogger on the move. Thanks to his active participation, he applied to Refugees Welcome for a chance to be hosted by an Italian family, He was accepted and is now living there. He was also granted the Never Alone bid for a 2-year scholarship at the renowned United World College of the Adriatic. Facebook:  Ibrahim Adnan Kondeh; Instagram: iam_ibra99

Mr. Mohamed Yahya resumed duties as Resident Representative of UNDP Nigeria on 20 June 2019. Prior to his appointment to Nigeria, Mr. Yahya was the Africa Regional Programme Coordinator for  UNDP between October 2014 and June 2019. Based in Addis Ababa, he was responsible for regional development initiatives in support of the African Union and Africa’s Regional Economic Communities. He has also served as UNDP’s post-conflict recovery specialist supporting UNDP interventions in

Afghanistan and Liberia. Before joining the UN, Mr. Yahya worked as a senior peacebuilding advisor for the non-governmental organisation, International Alert, with a focus on West Africa. Mr. Yahya holds a master’s degree in Conflict and Development Studies from the School of Oriental and African Studies (SOAS), University of London and a bachelor’s degree in Politics and History from SOAS, University of London.

Ann Cairns, Vice Chairman of Mastercard In her role as Vice Chairman Ann represents Mastercard around the world, focusing on inclusion, diversity and innovation.  She plays the important role of senior ambassador and executive leader and sits as part of the company’s global management committee. Ann is passionate about the role Mastercard can play in delivering inclusion through innovation and has continued to build new global partnerships with governments, businesses, organizations and NGOs including the World Food Programme. Ann sits on the group board of the Fortune 500 Company Intercontinental Exchange (ICE) and is chair of ICE Clear Europe. Ann has a Pure Mathematics degree from Sheffield University and a M.Sc. with research into medical statistics and honorary doctorate from Newcastle University.