You’ve got a brilliant business idea: here’s how to sell it to venture capitalists in five minutes flat

As someone who’s passionate about the power of compelling speech, there is nothing I hate more than watching somebody blow an opportunity. A pitch to a venture capitalist, whether on stage in front of a crowd or one-to-one over coffee, can catapult an entrepreneur towards success — or fizzle into last week’s birthday balloon. Here are my pointers to ensure your time in the spotlight doesn’t dissolve into one of those moments you’ll consign to the personal paper-shredder of doom.

The pitch is the cream in the Victoria Sponge

When I was 26 I moved from Washington DC to New York City. While looking for the job of my dreams, I temped as a PA at an insurance company. This was in the days before high-speed elevators: from the 50th floor to the ground took about two minutes. One day I found myself next to a guy from Omega Advisors, the firm in the next-door office. By the time we reached ground, we’d discussed Oasis versus Pulp (this was the 1990s), the West Village where we both lived, what on earth Omega Advisors was (a hedge fund), and — as we passed Floor 3 — the fact that my dream was to become a political analyst. It turned out my elevator companion needed someone to help him in his role as Omega’s chief economist. Two days later I had an interview with the rest of his team, and I started the job the following month. 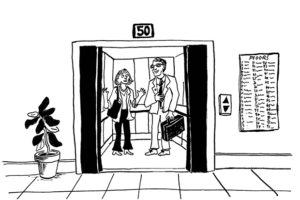 What’s the point of that real-life elevator pitch story? The pitch starts well before you start talking about your business idea. Serial entrepreneur Oli Barrett, who has led trade missions with high-growth UK businesses to the US, India and Brazil, says: ‘Time spent before and after the pitch is just as important. Over and over again I’ve seen VCs [venture capitalists] milling around a room drinking coffee, not on their phone but with no one talking to them.’ Use that time to build rapport. Likewise, don’t leave straight after and just hope the positive emails will flood in later.

My clients often tell me: ‘After the first two minutes I’m OK, I’m into the flow.’ Unfortunately, no one gives you two minutes to warm up. You wouldn’t expect a concert pianist to arrive on stage and work through a few scales and arpeggios before cracking on with the sonata.

Those first minutes are critically important because human beings are so quick to judge. There’s a concept in psychology called ‘anchoring’: it refers to the tendency to rely heavily on one trait or piece of information when making decisions. If you start poorly, there’s a good chance the VCs will ‘anchor’ on that, making it less likely they will buy into you and harder for you to get back on track. So you have a couple of seconds to grab and hold someone’s attention. How do you do it?

A great way to begin is simply not to begin. When the floor is yours… pause. Look around. Gauge the audience. This can give you valuable information about the mood they’re in. The pause will also give the impression of gravitas. In the video of Leonard Bernstein’s celebrated 1973 Norton Lecture at Harvard, titled ‘The Unanswered Question’, he waits a full nine seconds before starting to speak.

Then, think of the opening of Beethoven’s Fifth Symphony with its famous four notes: Da Da Da DAAAAAA. They are simple, stirring and (you guessed it) they start with a pause. Then there’s another pause. The beginning of your pitch should have that kind of impact. This is not to say that you need to shout. But by getting the energy up at the start you show how you mean to continue.

Neuroscientist Professor Olivier Oullier thinks Beethoven knew that after a few minutes, the audience would fall asleep. The ‘punches’, as he calls them, serve to ‘wake the audience up’.

This isn’t just about delivery. Having introduced an important theme at the beginning of your speech, you can return to it later, increasing your chance of being remembered. Hook the audience right from the start. Emotion is always a strong way to do this. ‘I’m delighted to be here.’ ‘I’m passionate about…’ Why emotion? It helps you sneak past the ‘bouncers’ in the listeners’ brains that filter out the predictable. If you don’t surprise people at the start, you risk losing them.

Professor Oullier recommends starting with the unique feature that makes your idea special. This determines whether people will stay with you through the opening, or groan and think: ‘Oh yeah, I know this already.’

If your brilliant business idea is around food and nutrition, remember everyone thinks they know a lot about diet, so you have to give the audience a reason to stay tuned: ‘I’m going to tell you something you’ll be incredibly surprised to hear.’ ‘Let me tell you about my unique approach to…’ This way, the audience will anchor on the ‘special take’ rather than just the ‘diet and nutrition’ label.

And if you’ve got relevant credentials, for heaven’s sake say so right at the start. Barrett says, ‘I’ve seen people who work for Nasa mention that as an aside at the end. An entrepreneur who had developed a flood-mapping technology completely forgot to mention his double PhD from Cambridge in flood prevention.’ 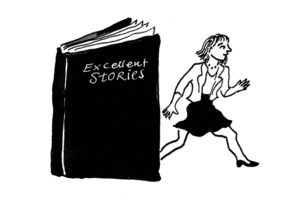 The author Neil Gaiman has an idea that stories are the real life-form and people are just the peculiar by-product of the stories’ need to breed. The reason that people are genuinely addicted to stories is because they are symbiotic organisms that we live with and that allow human beings to advance. Put more simply, stories are memorable, compelling and much easier for you as the speaker under the spotlight to remember than reams of business facts and statistics. Don’t forget to include some colour and character, and maybe even a little judicious name-dropping — or as Barrett puts it, ‘names and organisations that the audience will know, like and respect’.

Matthew Barzun, US ambassador to London, likes to quote a Kentucky politician, in turn quoting a Baptist preacher:

‘Remember the Five Bs… Be Brief, Brother, Be Brief.’

A pitch is not the moment to run through your entire organisation chart. It isn’t a 20-minute overview of your business crammed into five minutes. Oli Barrett says, ‘It’s like a well-edited movie trailer, designed to spark a conversation.’

It’s not over till it’s over

My children’s piano teacher tells them, when they are preparing for exams, to be sure to end their piece ‘strong’. They practise the ending over and over to make sure that, even if they have made a slip-up in the middle somewhere, the examiner will hear the closing bars performed with the expression, dynamics and articulation that the composer intended.

Your closing words are equally vital. Plan every one of them. If you’ve created a great impression from the beginning of the pitch, you want to continue it right until the end.

Edie Lush is a journalist and communication trainer. Her book How to Speak with Confidence in Public has just been published by Macmillan.