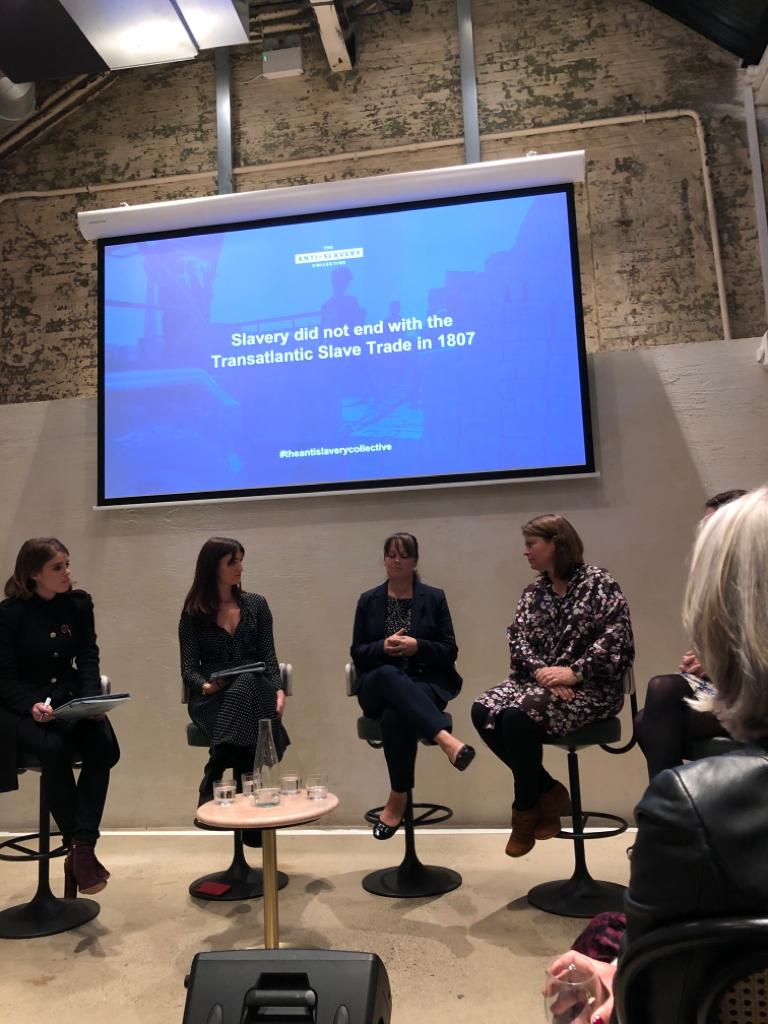 In 1807 William Wilberforce, along with many supporters, managed to put an end to the Transatlantic slave trade. It’s a historical event that is rightly celebrated.

Yet I wonder if many Britons think that this was the end of slavery in the UK.

Sadly this isn’t the case.

At an event I recently attended – Tech Tackles Trafficking which was organised by the Anti-Slavery Collective – I discovered where slavery is now and how technology is helping states, organsiations and inspiring individuals to combat it.

The figures for slavery in 2019 are not cheering.

Yet at the same time, the will to end slavery once and for all – it is Global Goal number eight which aims for ‘Decent work and economic growth,’ – is inspiring individuals and groups to seek new technologically driven way to combat it.

At the event I listened to Doreen Boyd, from Rights Lab, Nottingham, who gave details of her imaginatively titled programme, ‘Fighting Slavery from Space.’ Doreen and her team harness satelite technology to lead the battle against slavery.

In India many slaves work with brick kilns tirelessly making bricks for their captors. The satellites are able to track the kilns and can record where they are being used, giving information to the authorities to investigate whether the kilns are legitimate or staffed using slave labour.

As Doreen explains, “Modern slavery is one of the most pressing human rights issues of our time. It is therefore vital that today’s anti-slavery movement have access to as many tools as possible to both understand and prevent this crime. This includes harnessing available satellite technology to investigate industries, countries and regions where modern slavery practices are commonly reported. Remote sensing can provide evidence to support new forms of advocacy, accountability and action in the effort to prevent slavery and support survivors. In fact, remote sensing technologies are already being implemented to support anti-slavery action.”

Doreen also gave another example: Cobalt mining in the Congo, another industry and region notorious for its use of slave labour. The satellites are able to track movements of earth around holes in the ground where people are entering and exiting mines. Once again the police can be tipped off and can investigate if unauthorized mines are in use.

Technology is also being used to identify slaves in developed countries like the US and UK.

In her presentation Sherrie Caltagirone, Founder and Executive Director, Global Emancipation Network, which is a nonprofit dedicated to ending all forms of human trafficking through coordinated use of technology and data, argued that “human traffickers are reliant on current technology to increase their revenue. But the same technology can be used against them.” She spoke about how image recognition tools have been given other the police to help them identity schoolgirls who are being held as slaves. The app can identify the uniforms and alert authorities if it isn’t a local one. Many schoolgirls are trafficked in their uniforms and often they are the only clothes they own.

It is just one of a series of initiatives that Sherrie and her team have developed. She explained that they take their information from a variety of sources including both the dark web and public records data. They then enrich the data they have with geospatial tools, natural language processing and process images through specialised image analysis tools to gain insights into the people in those images, such as their age, gender, ethnicity, and other attributes. The data is then made available free of charge to all organisations with a valid counter-human trafficking mission via their multi-tenant intelligence and data analytics platform, Minerva.

An example of how it can work is by studying the language used in advertising, including emoji or text embedded in images. One sign of an underage sex trafficking victim could be words like “lolita” and “fresh” in an advertisement. Studying language and data shared in ads also helps differentiate between posts from independent sex workers and those that are likely to be sex-trafficking victims.

Finally Joséphine Goube, CEO from Techfugees outlined ways in which people in developed countries can work to help refugees. There are a host of brilliant innovations listed here including Integreat, an information app and website tailored to the specific needs of both newcomers as the users of the app and municipal administrations as the content provider. It is multilingual, offline and free. Se also Paper Airplanes a nonprofit that uses video conferencing technology to provide free, peer-to-peer language and professional skills instruction to young adults and teens affected by conflict in the Middle East and North Africa.

You can find out more about the organsiation behind the event The Anti-Slavery Collective, which was founded by Princess Eugenie and Julia de Boinville here.

Claudia Romo Edelman and I looked at one aspect of the story of human trafficking while telling the story of Ibrahim Kondeh in the Global GoalsCast podcast, an epic tale which spans over two episodes.

You can hear it here.